Preemies develop differently than full term babies. And here is a great example…

Full term babies spend their time in the womb tucked in a ball-like position. When full-term babies are born, they often “spring back” to that ball, or fetal, position. Their brains have developed enough to keep their muscles in this flexed position, which builds strength and enables them to calm and soothe themselves.

Preemies, on the other hand, lack the muscle and brain development needed to keep their limbs close. Since Jax born born 17 weeks early, he spent considerable time with his arms and legs spread out to the sides in a “flattened” position. We learned right away that this was not an ideal position.

Even when Jax was in critical condition, the nurses made it a priority to turn him from his back to his side as much as possible. (In the early weeks, we were unable to turn him onto his stomach because he had an umbilical line.) Sometimes the change in position would help his breathing, other times he would spell and they would have to move him again. It was a constant “thing” trying to get him into a position where he could breathe better. Once we found a position that worked, we would prop him up with positioning tools to help him stay in that position. The tools also helped him stay in the “fetal position” with his arms and legs tucked in to his body.

I didn’t know it at the time, but this was a form of Physical Therapy. 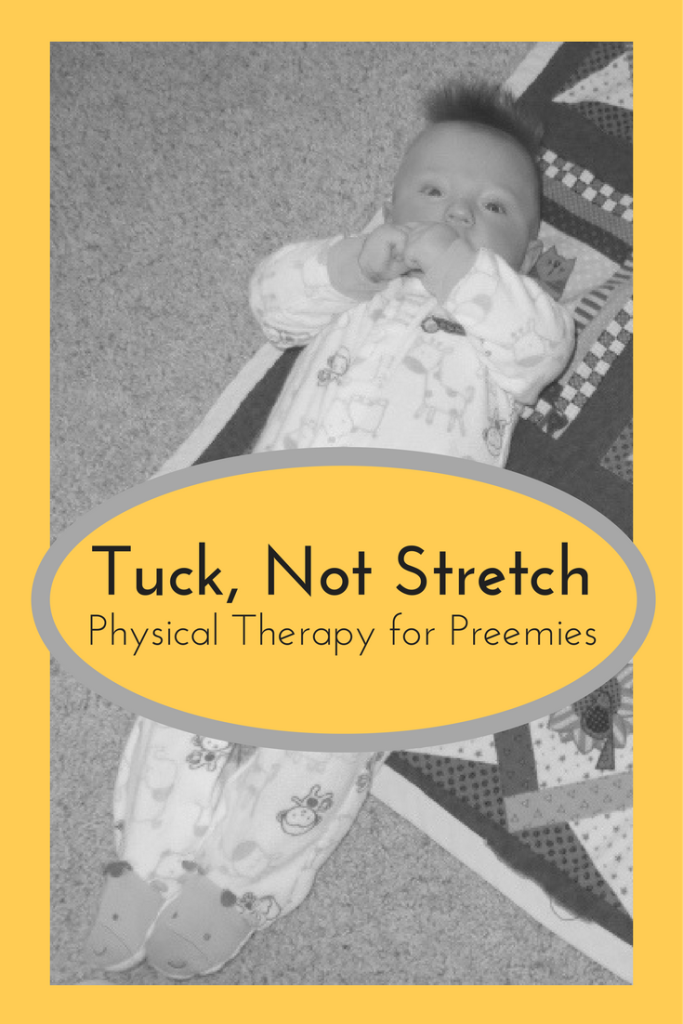 In the hospital, Jax received regular Physical and Occupational Therapies to help his muscles grow and develop.  He received infant massage to help prevent his muscles from becoming stiff. He was turned multiple times a day from his back to his side to his stomach to his other side to prevent “flat head.” We were taught to bring his arms and legs to midline and to use our hands to mimic the walls of the uterus to help him get used to the fetal position. However, even with all this work, often times, the only position that would allow him to breathe better would be him laying flat on his back, arms and legs spread out to the side.

Jax spent four extra months learning how to stretch out when he should have been learning to tuck in.

Because of this, we knew Jax had a very high chance of needing additional Physical Therapy support once he got home. At our last Early Intervention and Pediatrician appointments, we mentioned that Jax felt “tight” in his legs and was unable to bring his toes to his hands or mouth. The pediatrician also noticed that he has reduced reflexes in his legs and feet. This is preventing Jax from being able to roll over, sit, or scoot.

While these things can be an indicator of Cerebral Palsy, the doc feels that is not something to worry about yet. We will start Physical Therapy to help Jax learn to bend his legs. I’m sure it will be a success and Jax will be rolling over before we know it! And then it’ll be time for child proofing!

Did your preemie receive Physical Therapy? How did it go? What did they do? Did they like it? We’re new to this, so any advice or thoughts you have are more than welcome! Please let us know about your experiences in the comments.

*An Early Start participates in the Amazon Associates Affiliate program. Some of the links listed are products sold on Amazon.com. If you click on one and make a purchase within a 24 hour period, we will receive a tiny commission from Amazon.com at no additional cost to you.

7 thoughts on “Tuck, Not Stretch (Physical Therapy for Preemies)”