In honor of Prematurity Awareness Month, I asked some of my fellow preemie moms to share their stories here on the blog. I figured you all know our story, but there are so many more faces to prematurity. I think everyone’s story deserves to be told. What better way to raise awareness than to hear what it was like for other families… Read more stories here.

I’ve always wanted to have kids of my own, but never imagined it could be so difficult to get to that point! My husband and I struggled with infertility after finding out I have polycystic ovarian syndrome (PCOS). After months of disappointment, we found out that we were pregnant…with twins! My pregnancy was great, until I was put on bedrest at 19 weeks. I was let off bedrest, but by 28 weeks we were going for check-ups on a bi-weekly schedule. In April 2012, we were told that Twin A had increased in his percentile, but Twin B was holding steady so there was nothing to worry about. By May 25, an ultrasound showed that Twin B had decreased from the 25th percentile to the <10th percentile for babies at 28+1. Specialists were immediately contacted in the Cities, and I was put on strict bedrest for Memorial Day weekend. I got steroid shots that weekend, and another ultrasound to check on Twin B’s status.

The Tuesday following brought an ultrasound at Fairview Riverside which could do doppler imaging and an appointment with a maternal-fetal medicine specialist. Our world flipped upside down in that doctor’s office. Everything stopped, but the questions multiplied. We found out that Twin B was showing an absent flow of blood through his umbilical cord. If it got better, they would hold off labor as long as possible. If it stayed the same, I would be delivering my boys the following day. Wow…one day to prepare for the miracles we didn’t expect to arrive for another 11 weeks. Horror, shock, confusion, and questions filled my head. I didn’t know much at all about preemies…could they survive at 28 weeks?

I spent the day hooked up to monitors in the antenatal unit. An ultrasound the following morning continued to show an absent flow. My c-section was scheduled for later that morning. The next few hours were a whirlwind of NNPs, nurses, doctors, medications, and no end to the fear that enveloped me. At 2:07 and 2:09 pm, Aidyn and Owen came into the world; they were born at 28 weeks and 6 days.

Because of his gestational age, we had to wait a week to be able to hold Aidyn in our arms. The feeling of having that little baby on my chest for our first kangaroo care is something I will never forget and will treasure forever! Having him in my arms finally made him real – made him mine. Aidyn’s NICU journey was pretty uneventful as he eventually moved his way off the ventilator to no oxygen. He tolerated feeds well, began breastfeeding, bottled but didn’t like it, and after 48 days, Aidyn was discharged from the NICU. We got to take him out of the hospital with us exactly 30 days before his due date. The joy we felt being able to take him home was incredible, but at the same time it was heartbreaking that his brother would have to be left at the hospital alone.

We live 70 miles from the NICU, so I stayed full-time at the Ronald McDonald House. My husband came up on his weekends to be with us. Aidyn went home for a couple of days and then moved into the RMH with me. Both of us went back to the NICU every single day to spend the entire day with Owen. The nurses kept a bassinet next to Owen’s bedside for Aidyn.

Owen’s NICU journey was exactly the opposite from his brother’s. We had to wait 10 days to hold Owen because he was on blood pressure medication. I remember holding him for kangaroo care and keeping him on my chest with just my pinky finger under his tush to support his weight. I didn’t think babies could be that small and be alive! He was tiny, he was hooked to a ventilator and countless other tubes, wires, and machines, but he was alive and finally in my arms!

At just over 2 weeks, Owen developed necrotizing enterocolitis (NEC) with a perforation in his small intestine. We spent a day and a sleepless night in the chairs next to his isolette not knowing if our tiny baby would survive. It was horrible, but Owen SURVIVED! The next two months brought 3 surgeries related to NEC along with a new infection or problem about every two weeks. Just after their due date in August, Owen had surgery to reconnect his intestines. Soon after it was obvious something was wrong. Doctors don’t recommend having two bowel surgeries in the same area within 6 weeks of each other unless it is an emergency. A week and a half after being reconnected, Owen had surgery again resulting in an iliostomy and the discovery that NEC had also killed ¾ of his colon, which had to be removed. Back to back surgeries were too much for Owen; he got very sick, coded in the middle of the night in September, and stayed on the oscillating ventilator for two weeks.

Owen truly taught me what “turtle time” was. As much as I wanted him home, I began to realize that it was he who led the way. When he was ready…that’s when he would get to come home. I started having no expectations and told people we hoped to be home by Christmas, because I truly didn’t know if it would be any earlier. I learned more patience during this time than I ever thought possible, and truly took it one tiny moment by the next tiny moment. I had to wait 20 days to hold Owen after surgery. It killed me. I never thought it would happen, but Owen finally got better and was eating well enough that the “H” word was finally mentioned again. On day 143, Owen was discharged from the NICU. He weighed 5 lb 13 oz and was corrected to 2 months and 2 days.

Since coming home just over a year ago, Owen has had 2 additional surgeries. Both he and Aidyn are healthy and happy! They are hitting milestones on their own time schedules, they laugh with each other, they play with each other, and they fight with each other like the brothers they are! My miracle babies are 17.5 months old (corrected to 15 months). Aidyn weighs over 25 pounds, and Owen is around 20 pounds. I stare at them in awe, pride, and admiration everyday at how far they have come, the things they have overcome, and just how perfect they are! I love them more than anything!

I never imagined that prematurity would touch our lives or have such a lasting effect. My boys still have obstacles to overcome due to being born extremely prematurely. But I can never thank the NICU staff enough for saving my babies, our families for being such extreme foundations of support for us, and God for guiding the whole journey. I made some lasting friends while we were in the NICU, and I didn’t know how lonely it would be when their babies were all discharged and we were still there. I love to show Aidyn and Owen off to people, and think how lucky and blessed we are every. single. day. 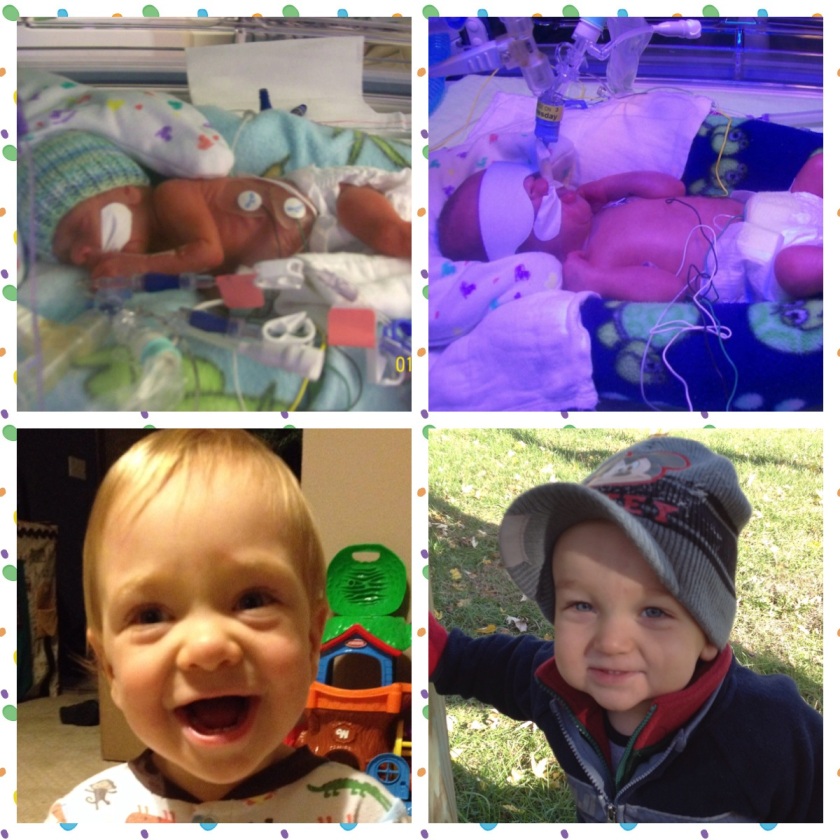