My blogging friend over at JAM Sessions is a genius! She’s doing a series of posts about ideas for surviving isolation. Last week, she featured my post about Jax’s Sensory Kitchen.

What’s funny is that her family is vegan and the recipe in my post is no where near vegan! I’ve decided to try modifying the recipe to make it vegan-friendly. I’ve never baked vegan before, so it should be a fun experiment. If you have any ideas on how to successfully do this, please let me know!

While you’re over at JAM Sessions, you should check out today’s guest post from Becca from the blog Cheering on Charlie. Becca has some great ideas for activities in the post called Seven Sensory Sensations.

Today, Jax and I played with cotton balls. I thought maybe we would have a “snowball” fight, but instead, he wanted to put them all in a bowl, stir them with a spoon, and serve me tasty bites of cotton ball casserole. 🙂

The last two days have been beautiful here in Minnesota. Temps even reached 40° yesterday, which means it’s practically time for shorts. Jax and I had a blast playing outside in the fresh air and sunshine! We walked up and down the sidewalk today for an hour. The snow piles are much taller than Jax so it’s like he’s walking in a tunnel maze. He thought it was a great adventure. 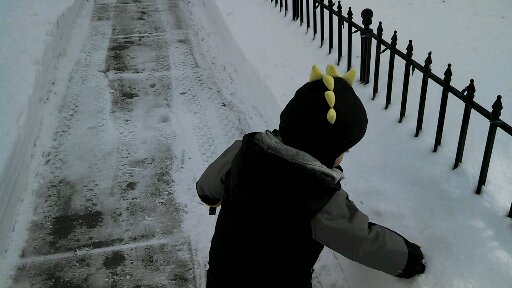 4 thoughts on “Surviving Isolation: Guest Post and Outside Fun”