I was on vacation when went into labor without warning at 23 weeks, 3 days pregnant. I was airlifted by helicopter to a strange hospital hours away from home. I wrapped my arms and legs around the bed rails as tight as I could hoping that would keep the baby from being born. I did not want to meet my baby yet because I did not want to watch him die. When the doctor told me I had to push, I cried from the my depths of my soul “NO – I WILL NOT HAVE THIS BABY TODAY!”

And the delivery room was silent. And after long torturous minutes of resuscitation, we heard that first tiny mew – a sign of life – at an age when many doctors won’t perform life-saving procedures.

We watched our tiny son, Jaxson, who weighed barely more than a pound, struggle to breathe, fight off sepsis, get at least 6 blood transfusions,  and battle insulin problems. He struggled with problems with his eyes and vital organs like his heart and lungs. Doctors said he had a 4% chance of healthy survival.

We had to wait 14 sad days before we could even hold him.

My body was only half-way done being pregnant when Jax was born – producing breastmilk was not something it was ready to do. I could barely feed my baby.

We lived in the hospital for 93 days.

Those were the most heartbreaking and grueling months of my life. I struggled to put one foot in front of the other. Some days, I sobbed in the shower, wondering why?

Everything else ceased to matter – the only thing I cared about was my son and the literal and precious balance between life and death. 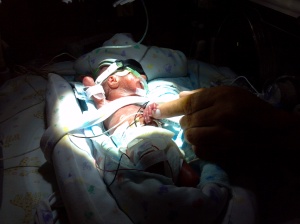 For all of Jax’s life, we’ve been bombarded with grim statistics, scary and real possibilities for the future, hundreds and hundreds of appointments and therapy sessions and evaluations, doctors that say “he’s doing well, but…”.

We’ve been taught from day one that we are simply waiting for the other shoe to drop.

And then I started hearing things like, “when are you going to get over it?” and “other people have it worse than you.”

And those comments naw at my core.

The reality is that our lives changed forever. There was a trauma and I am still healing. To “get over” Jax’s beginning would be to forget a time in my life that was as defining a moment as my mother’s death.

I know that eventually, as with any loss, the edges will wear down; the memories won’t be as sharp and painful. Eventually, there will be days where I don’t think about Jax’s traumatic arrival (I’m not there yet). Eventually, I will stop waking up in the middle of the night panicking because I dreamt that Jax died and when I wake up, I’m not sure if it’s real or not. Eventually, I will be able to look at his baby pictures – the ones where he is covered with so many tubes and wires that I can barely see his face – and not cry.

Prematurity has shown me the truest and rawest example of strength – a baby boy fighting for his life when all the statistics said he shouldn’t. On the days where I don’t think I have any strength left, I remember how hard Jax worked to live. Prematurity has taught me what it means to feel fear and hope at the exact same time.

When I watch Jax walk, talk, and eat I am constantly reminded that, according to the statistics, he wasn’t supposed to do those things. Prematurity has taught me to appreciate every second of every day.

I’m in awe of how absolutely amazing life really is when I watch Jax play imaginary kitchen or snuggle with his stuffed animals or laugh full-on belly laughs. Jax has taught me that it’s ok to have hope for the future, even when it’s scary.

I will never, ever get over it. And I don’t want to.

This essay and I are part of the Messy, Beautiful Warrior Project — To learn more and join us, CLICK HERE! And to learn about the New York Times Bestselling Memoir Carry On Warrior: The Power of Embracing Your Messy, Beautiful Life, just released in paperback, CLICK HERE!

22 thoughts on “When Are You Going to Get Over It? The Lasting Effects of Prematurity – My Messy Beautiful”