Today was Jax’s first day of preschool! He was so excited – he told me yesterday that he wanted to “go to the teacher’s house now.” So this morning when it was time to get on the “bus” (it’s really just a minivan), he ran out the door and jumped right in! 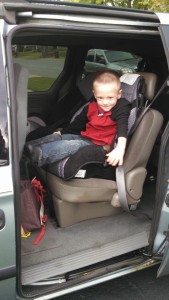 Unfortunately, the car seat was not installed properly, so I spent 20 minutes re-installing the two car seats in the van. (There is one other child on Jax’s bus “route.”) The driver felt bad, but it was totally unacceptable – the seats were barely secured to the seat! I was surprised the transportation company did not verify that the car seats were installed correctly before the driver came to pick up a kid! I was upset, but I was able to install the seats better so I sent Jax on his way.

He wasn’t sad at all – he waved the whole way down the driveway.

After the car seat fiasco, I wasn’t entirely sure I trusted the driver so I decided to go to the school and meet Jax at the entrance. Plus, I was hoping for some better pictures – since I spent all my picture time installing car seats!

Suddenly, Jax comes walking up a staircase with a strange teacher in tow. The driver dropped him off at the wrong door! Oh.My.God. I’m so glad that at the very last minute I decided to attached some identifying information to Jax’s backpack – it was the only way they knew who he was and where he should be!

I was furious. But Jax was excited – he was bouncing up and down and smiling. He even followed the teacher’s instructions and sat on the bench to wait for another classmate.

Once he was with his teachers and classmates, I felt a little bit better, but it was still really hard for me to walk away feeling confident that my son was safe and in good hands.

I know the school knows what they are doing (mostly) and I understand that mistakes happen, but it was a really stressful morning for me! I called the transportation company immediately after I left school. They were responsive and took action to make sure the car seats were installed safely. They apologized, but they also made some excuses. The dispatcher said “the driver should have known how to do it” and “they told us to drop off {at Door A} first, but then they changed it to {Door B} at the last minute.” This sounds like passing the buck to me and I did not appreciate that.

I guess we will see how things go on Monday!

All in all, it was a good day for Jax! He came home and told me “I play kids.” He also consistently used the sign for “more, please” when he was screaming for lunch. My guess is that he had to practice his manners during snack time today. 🙂 He was exhausted and crashed hard almost immediately after coming home. He is still sound asleep.

When Jax blew me kisses today, I was still afraid, but for a different reason: my kiddo is growing up. There will come a day when I’m not the most prominent person in my son’s life. He waved goodbye, grabbed his teacher’s hand, and disappeared into the crowded hallway.

2 thoughts on “First Day of Preschool”