Most days, when I look into Jax’s bright blue eyes, I feel like our family is complete. Some days, when I watch him gaze out the window searching for new friends, I’m sad that he doesn’t have a little brother or sister to keep him company.

Is one child enough?

Two kids: that’s always been our plan. And all things aside, there was never really a question of having another. Jax wasn’t supposed to be an only child.

But, throw in the difficulty we had getting pregnant and the intense fear and reality of having another NICU baby, well – that makes the decision a bit more difficult.

There are so many factors affecting our decision.

We needed help sorting through all of these things.

Yesterday, we had a preconception consultation with a Maternal-Fetal Medicine (MFM) doctor and a genetic counselor at the University of Minnesota who specialize in high-risk pregnancy. It was the first step in moving forward with a decision to have another child or not. It was also a chance for us to get some closure on what happened with Jax.

I’m so glad we did this! The consultation gave us… HOPE!

Here’s what we learned…

There was no reason why Jax came early. The doctor said “Sometimes these babies just do what they want.” This was good and bad. Good that I know now for sure that there was nothing I did to cause his early delivery. And bad because we still don’t have any answers. (I think we’re getting closer to being ok with the fact that we will never know.)

I would be seen by the OB weekly once I hit 16 weeks.

I will be checked for uterine abnormalities prior to conception. The doctor will inflate my uterus with saline and check for anything suspicious. Apparently, there is a chance that my uterus just won’t expand enough to carry a full-term baby. This could be a reason Jax came early – there just wasn’t enough room for him! The results of this test will bring us one step closer to a decision.

The doctor left us with these words “You could deliver a healthy 8lb baby after being induced at 41 weeks.” Wow.

Now – we have some thinking to do! Will we be able to handle the stress and worry of a second pregnancy? Will we be ok with the fact that there is a high chance of having another NICU baby? Is one child enough?

We don’t know yet. But it feels good to have some hope.

Did you have a baby after a preterm birth? What was it like for you? How did you cope with the worry and stress? Was your second child full-term? If not, how did you juggle having a child at home and one in the NICU? Any words of advice for us? 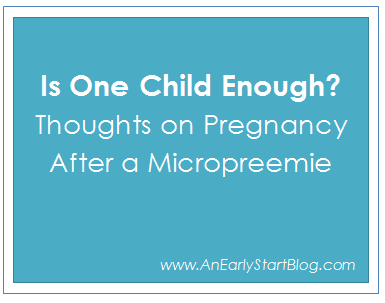