Two hours after Jax was born, I was visited by a lactation consultant in my hospital room. She asked if I planned to breastfeed. What?!

I hadn’t even seen my tiny 1 1/2 pound baby yet. I’ll admit, the first thing through my mind at that moment was…what good would it do? I told her that I wasn’t sure yet. She gave me the “look,” she said “You do know that giving breast milk is the only thing you can do for your baby now, right? It’s liquid GOLD!”

I started pumping the next morning. It felt weird. Nothing happened. They told me it could take a few days for my milk to come in.

I tried pumping next to Jax’s bed side. He had a spell and turned blue. Nurses were rushing to get his heart rate and oxygen levels back up. My boobs were hanging out for all to see. That was the last time I pumped bedside while in the pod at St Cloud.

They had a pumping room with a curtain and two old chairs. There was one ugly painting on the wall. The clock ticked so loud, I could hear it over the “chugga-chugga” of the breast pump. But I had started to get milk! And when Jax was only a couple of days old, they gave him the first of my breast milk through his ng tube. It was only about 2ccs, but he tolerated it! As soon as I saw that all my pumping efforts were going to pay off, it made the ugly pumping room look a little prettier – I was actually doing something for Jax.

I usually produced 1/2 ounce of milk at a time. On good days, I would get almost a whole ounce! I thought that was pretty good…until I saw the other moms leaving the pumping room with huge bottles full of 5 or 6 ounces.

So, I started taking fenugreek and Mother’s Love Plus capsules, which were herbal supplements known to help increase milk supply. They helped, but not enough.

I took Reglan, a prescription medication with a side effect of increased breast milk production. Other side effects included uncontrolled muscle spasms, inability to keep still, Parkinson’s-like symptoms, nervous system problems…and I got them all. OK – that didn’t work…

Soon, Jax was up to 1ml of breast milk, then 5mls. He was eating like a champ!

He ate so little at first, I was starting to gather a little stockpile of milk that I kept in the freezer. I was so proud!

And my freezer supply was dwindling.

And then I started getting sharp, stabbing pains that started in my breasts and went up my neck and chin to my cheeks or down to my stomach. I was diagnosed with Reynaud’s Phenomenon which caused extreme pain during pumping. I tried the prescription medication, Nifedipine (which is a high blood pressure medication) to help reduce the constriction in my veins. The medication made me extremely dizzy, I almost passed out more than once.

But, damn it! I was going to get Jax his “liquid GOLD!”

I kept thinking about what the lactation consultant said that first day “It’s the only thing you can do for your baby.” I was failing him…again. First, I couldn’t keep him in; then I couldn’t feed him. Guilt is a bitch. (Are you seeing a common theme here?)

I was miserable. I spent at least 5 hours a day hooked up to a machine. I did “power pumping” where I pumped for 10 minutes every 20 minutes for 2 hours. I read every book and research article that I could find about increasing milk supply. I spent hours with the lactation consultants trying new techniques. I said I wanted to quit….they said, hang in there, you can do it!

My body just would not cooperate. I was stressed out and in pain. (I’m sure that did not help.) I was so guilty. All of the posters in the hospital told me day in and day out that “Breast Milk Is Best!” But, there were no posters that said “Pumping Milk for a Preemie Might Not Work – It’s Not Your Fault!”

Jax was 2 1/2 months old and didn’t qualify for donor milk because he was too old. The only option we had was formula. Oh – GOD, don’t you know that formula is NOT as good as breast milk?! (At least, that was according to the posters on the walls.) 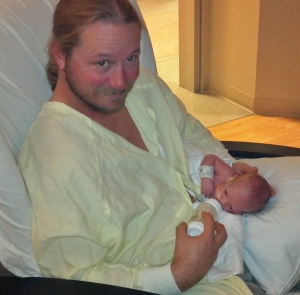 And he got formula…and he didn’t get sick. He didn’t die. Bill Gates was a formula-fed baby. (I don’t know if that’s actually true, but one of our nurses told me that, and it made me feel better!)

And then dad could start feeding him, too!

Even though pumping breast milk was one of the most difficult things I’ve ever done, I’m glad that I stuck with it for those 2 1/2 months. I’m glad I had the lactation consultants there to keep me motivated when I wanted to quit. But, I just wish there was more support for us formula-feeders.

I’m not encouraging any one to stop pumping. If you are, and it’s working, please keep going! You are doing an amazing thing for your baby. But, if you’re like me and pumping is becoming a source of pain and stress for you and it’s just not working even though you’ve tried everything…it’s ok to stop. We can let go of the guilt together.

Maybe I’ll make a new poster for the walls:

Breast milk really is liquid gold, but formula is ok, too.

It seems like a lot of us preemie mothers have struggled with breastfeeding or pumping for our preemies – this is one of our most popular posts. Thanks for reading! We’d love it if you followed our blog and liked us on Facebook.

*An Early Start participates in the Amazon Associates Affiliate program as a means to earn incremental income for the site. Some of the links listed are products sold on Amazon.com. If you click on one and make a purchase within a 24 hour period, we will receive a small commission from Amazon.com at no additional cost to you. These commissions help to keep food on our table, so thank you!